Having just returned home from a ten day sojourn to Washington, DC, I'm still opening my mail and catching up with myself.  I was sad to read in the latest issue of the newsletter of the Sappington-Concord Historical Society that one of the most knowledgeable historians of our area passed away on December 30th.  I am sorry and surprised I didn't read or hear about it before now.  I have spent some time gathering information and hope you will all read about Mr. Wagner as we called him. I had the privilege of spending an evening with him in more recent years and was reminded of his strong force in the historical activities of our area, what a treasure! He was one of my teachers also at KHS.  I had never known he held a PhD and had never heard him referred to or called "Dr. Wagner".  What a shame, the honor was his due.  The obituary and comments are copied from www.legacy.com and the articles from the SCHS Newsletter, Spring, 2017.  SORRY, I have changed the photos of the articles 4 times and still don't have it large enough.  If you go to the first two pages and right click, then do it again, the text will enlarge a bit!  I can't figure out why it won't enlarge more!  It's worth the trouble to read it though...

Mr. Wagner was fun. Had fun. Made fun. Personified droll.

“Mr. Wagner opened up the world to me. I have so many fond and amusing memories from being in his class in the 1970s! We went through Nixon opening China together. US History gained new dimensions in his class. He brought out our intelligence and demanded we think.
Though he likely never knew it, he inspired me to become a teacher, and I believe his influence and all that I gained in his presence has been spread still further through my own practice. May Mr. Wagner Rest In Peace.

“One of the best teachers I ever had. It was a privilege to have been one of his students. Rest in peace.

“Although many years have flown by, I have often thought of this wonderful, bright man with respect and gratitude in my life. He was by far the best teacher I had in high school by motivating you to excel. Work and come to class fully prepared. I frequently quoted him to my own daughters as they went through school: "A word to the wise is sufficient therein." Thank you, Mr. Wagner, for enhancing so many lives.

captain william bonsack January 21, 2017 | O'Fallon, MO
“Mr Wagner was a man that taught each of us as individuals but taught the class. The class of 1976 was blessed to have been touched by him. He was truly an icon that has remained with me into adulthood. May God continue to hold you in the palm of his hand and may you walk with him along calm and still waters. Until we meet again. May God shed his light on your family and may they relish in the memories of all that was and is good.

“I was concerned when I did not receive a Christmas card from Ross this year and was saddened to learn of his passing. He was my history teacher at Kirkwood High School for two different classes in 1971 and 1972, and was without a doubt the most influential teacher I ever had. I had intended to visit him this coming March as I do every time I return to St. Louis. May he rest in peace, and may his remaining family take comfort in the knowledge of the enrichment he gave for so many.

“Mr. Wagner could be exacting, and enthralling at the same time. He could get you to think about historical figures in a human, almost personal context...as if you could put yourself into their place. He would also relate stories about past students, and you could see the pride in his face while he would tell you about them. I don't know if he told any about me or not,...although I did use him as a reference when I was applying for my security clearance. Not related to AP History, but he also...

“Ross Wagner was the single most important teacher I ever had (including grad school). He introduced us to the work of various historians, taught us to think--and write--analytically, and refused to water down his academic expectations. Beyond that, he had a wicked sense of humor and the ability to engage students of all types. I was honored when he attended my father's funeral. Rest In Peace, Mr. Wagner: your life's work echoes beyond anything you could have imagined.

“Ross Wagner was one the best teachers I've ever had, and part of the reason I went into teaching myself. And he continued to be good friend and mentor after I went off to college. I will miss talking world events with him. I will miss the Margaret Rutherford Society. I will miss his laughter. A good, good man.
January 21, 2017
“Ross was a wonderful teacher. I always enjoyed visiting him when I came to St. Louis. God bless you Ross.

“Impossible to calculate the impact he had as an AP history teacher at Kirkwood High. We who were privileged to study under him are still informed by his unconventional insights and challenging teaching methods. And all that "Gonchagaschmiraria." He left an impressive legacy and I was honored to share a beer with him as an adult.

“Ross Wagner was probably the most important teacher I ever had. He was a wonderful educator who fussed at us in German, shared wise insights, had a sly sense of humor and taught us that learning history could be interesting and fun.

“A long-time family friend and an outstanding human being. None finer.

“The Sappington-Concord Historical Society offers its deepest sympathy to the family of our late founding member ROSS A. WAGNER on his recent passing.

His many contributions and foresight added a distinctive leaven to the development of the mission and effectiveness of our historical society--and we are both grateful and remembering of his involvement and accomplishments.

scott mcallister January 03, 2017 | Raleigh, NC
“Ross, Mr. Wagner, was a fabulous teacher and a friend. I am so glad that my son got to meet him last year. He had the boldness to teach history with the world view that applied to actors at that time. If that meant learning about the Russian Orthodox Church, then he taught us about it. He had treated his AP class students like college students; a humbling experience and such a good lesson. I loved hearing about the local history from him as well as in class. He will be missed.

“We will miss our dear friend and neighbor. Ross was a very kind and honest man and we always enjoyed conversation with him. 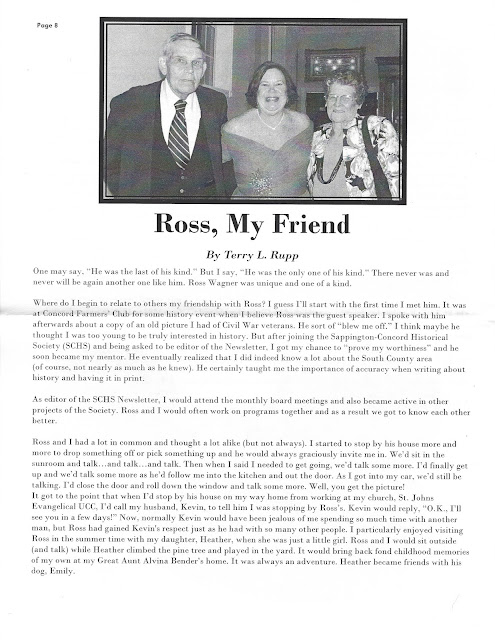 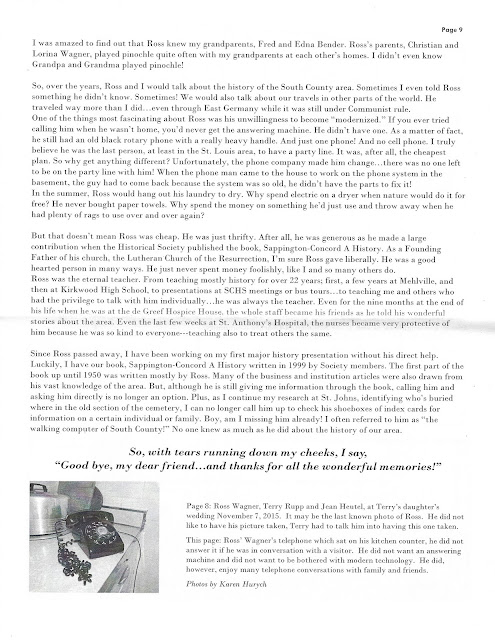 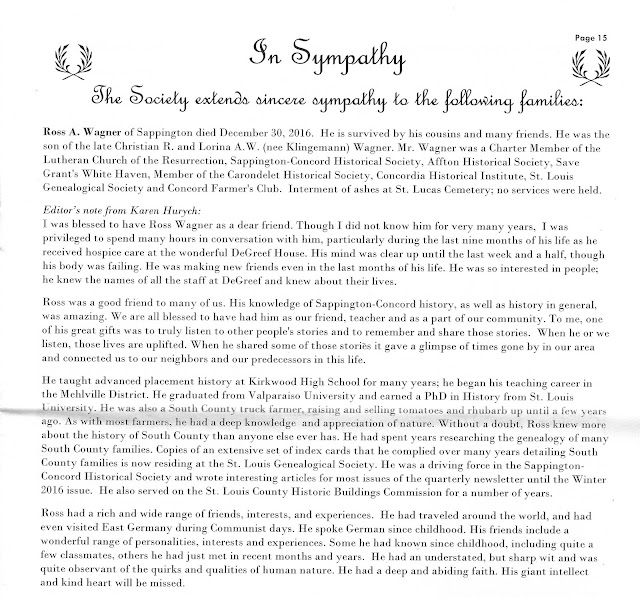 Posted by LeslieAlice at 7:20 PM

Email ThisBlogThis!Share to TwitterShare to FacebookShare to Pinterest
Labels: Obituaries